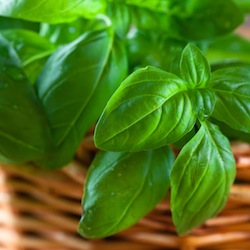 Basil is a member of the large mint family. It has long been used as an embalming and preserving herb, found in mummies of ancient Egypt. Perhaps because of its embalming usage, basil was also a symbol of mourning in Greece where it was known as basilikon phuton, meaning magnificent, royal or kingly herb.

Basil is one of the most widely-used herbs in the world. With so many varieties from which to choose, it is no wonder. From pesto to spaghetti sauce to dessert treats, basil runs the gamut in the kitchen.

The best part about Chef Club is having a community of other people who love to cook and eat healthy stuff. Share your experiences with this week's meal below: